In a recent class demonstration a narrow intense beam of red laser light was shined across the front of the classroom.  Neither the students nor the instructor were, initially, able to see the laser beam.  It was only when some chalk dust or a cloud of microscopic cloud drops fell into the laser beam and scattered some of the light that we were able to see it.   Because of how the laser beam was able to pass invisibly through air you were probably left with the following conclusion

Sunlight is very intense and when it shines through the whole atmosphere, where there's lots of air, we are able to see the scattered sunlight.  The atmosphere also contains particulates and clouds and they scatter sunlight.

We going to consider all of this now.  But first we'll look at what would happen, what you would see if the earth didn't have an atmosphere.

If you went outside and looked at the sun (you shouldn't do that of course) you'd see a bright sun against a black background.  You'd see the sun because you're looking back in the direction of one of the rays of light coming from the sun.  It would be like putting your head at the end of the laser beam in the demonstration the other day and looking back toward the laser.

If you look away from the sun and toward the sky you wouldn't see anything.  The sky would appear black.  That's because there's nothing to scatter or redirect the sunlight.  This is just like when you couldn't see the laser beam as it traveled across the front of the classroom.  You couldn't see the beam unless something was put into the beam to scatter some of the laser light.

To give you some sense of what black sky would look like, here's a famous photograph of earth taken on Christmas eve (Dec. 24, 1968) by the Apollo 8 astronauts as they orbited the moon (source of this image).

The sun is obviously shining in the picture, we can see it being reflected by the surface of the moon and the earth in the distance.  Sunlight is also shining through space between the moon and the earth but there's nothing there to scatter the light.  So you just see black; that's what the sky would look like if the earth didn't have an atmosphere.

Before we take the next step we need to remember that white light is actually a mixture of violet, blue, green, yellow, orange and red.

In the next picture we'll add an atmosphere.  Just air molecules, no particles, or clouds.

Air molecules scatter light.  But there's something new.  In the class demonstration we used just a single color of light, red.  The incoming sunlight is white, a mixture of all the colors.  Air molecules don't scatter all the colors equally, they scatter the shorter wavelengths (violet blue green) in greater amounts than the longer wavelengths (yellow orange red).  This is depicted above.  Actually the figure shows only short wavelengths being scattered just to keep things simple.  Air molecules scatter light in this way because they are very small (much smaller than the wavelength of visible light).


Violet has the shortest wavelength and is scattered the most.  However there isn't as much violet in sunlight as there is blue and green.  There's a lot of green light in sunlight (more than any other color as a matter of fact) but it isn't scattered as readily as blue.  So the end result is that we see blue light coming from the sky.  This is why the sky is blue.  When the air is clean (from of particulates), the sky has a deep blue color.  The response of our eyes is also involved, here's a little more explanation.

What about particles?  Particulates are much bigger than air molecules and a little bit smaller than cloud droplets.  They scatter light is the same way that cloud droplets and ice crystals do.  The scattered light from particles is white.

Here's a pretty good illustration of sunlight being scattered by particles.  There must be a lot of dust and particulates in the air in this photograph because you can see the rays of sunlight shining through windows in the dome of St. Peter's Basilica (Vatican City).  Note that the scattered light is white.  (source of this image)  You can see something like this outdoors when sunlight shines through breaks or holes in clouds, the beams of light are called crepuscular rays. 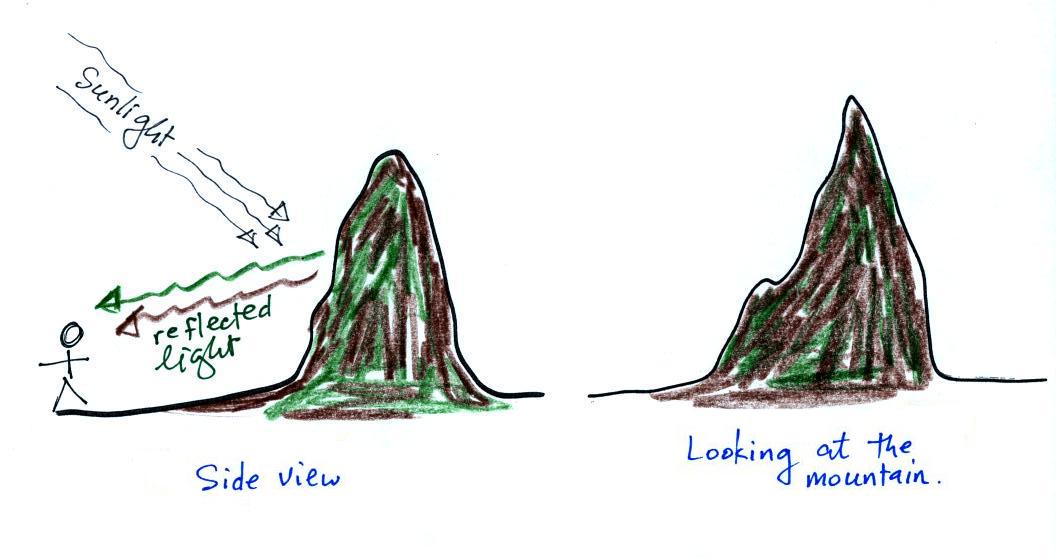 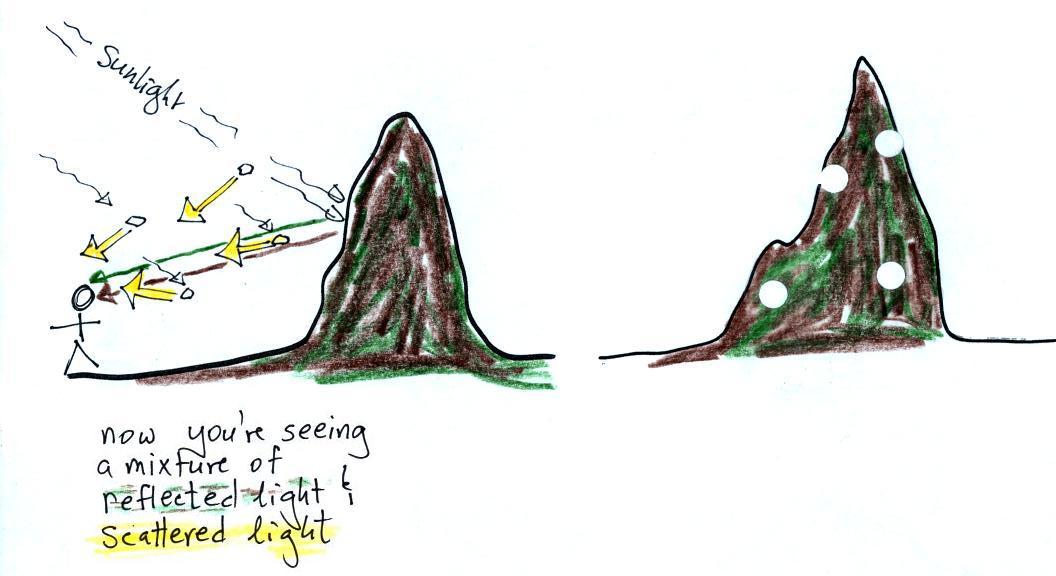 Now we'll add some particles.  When you look at the mountain you see brown and green light plus some white light that is coming from sunlight being scattered by the particles (the white light is colored yellow in the figure at left).  Some white specks of light have been superimposed on the view of the mountain at right. 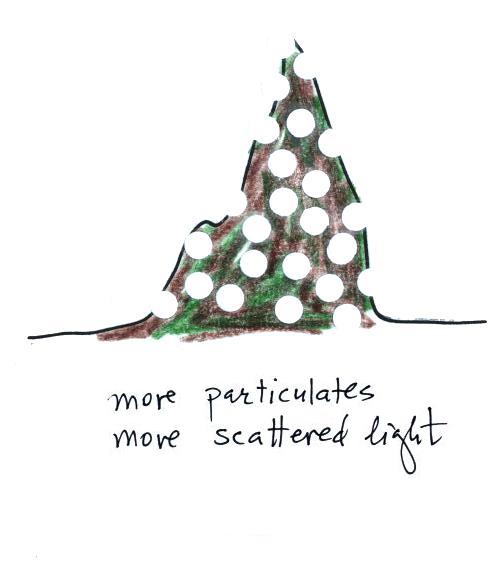 Just a single picture now, what you would see when you look at the mountain.  More particles, more scattered light, and more white light being mixed in with the brown and green reflected light from the mountain. 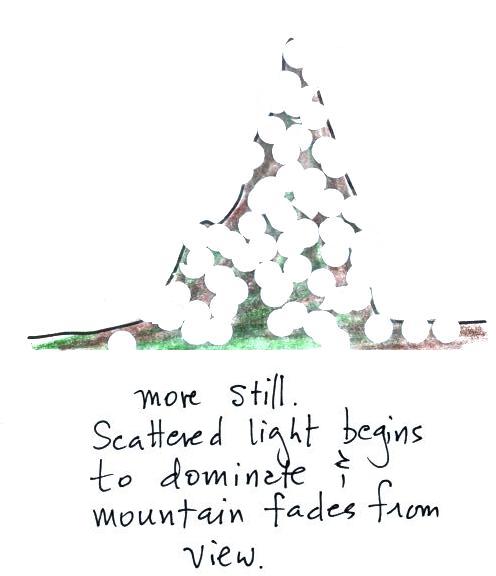 Even more particles.  Now the white light from scattering from particles begins to dominate.  Eventually it becomes difficult to even make out the mountain because of all the scattered light.  Light from the mountain also runs into particles on its way toward your eyes and gets redirected so that you don't see it.  Of course there was considerable artistic license used in this illustration.
You might think that when the air is clean that visibility might be unlimited.  That isn't the case.  Scattering of sunlight by air molecules alone puts a limit on visibility.  The following figure tries to explain why this is so.

The nearby mountain appears green and brown.  You are mostly seeing sunlight reflected off the mountain.

If you look closely I think you can see 5 mountain ranges in this picture (1 is closest, 5 is the most distant).  Notice how they became fainter and fainter and lighter and lighter blue.  It becomes hard to distinguish mountain range 5 from the blue color of the sky.
Clouds are normally white.  Around sunrise and sunset clouds often become yellow, orange, and red.  The reason for this is that the color of the sunlight that is shining on and being reflected by the clouds changes.

When the sun is low in the sky the rays of sunlight take a much longer path through the atmosphere and there is more opportunity for light to be scattered (and absorbed).

At Point 1 in the figure below we assume the incoming sunlight is white because it is a mixture of equal amounts of all the colors.  After this sunlight travels a short way through the atmosphere some of the shorter wavelengths get scattered and removed from the incoming beam of light.

The scattered light, Point 3, is what you see when you look at the sky.  Only a small fraction of the light in the original beam is scattered, so it's not as intense as the original beam and safe to look at.  It's also colored blue.


The unscattered light, at Point 2,  is the original mix of colors with a little bit of some of the shorter wavelengths removed.  This can change the color slightly form white to a warmer shade of white (colored yellow in the figure above.

When the rays of sunlight take a longer path through the atmosphere much more scattering can occur.  With enough scattering, almost all of the shorter wavelengths can be removed from the original beam of sunlight.  This turns the unscattered light orange or red and is shown at Point 4 above.

Here's a pretty impressive multiple exposure showing the changing color of the setting sun (source of the image).  Notice also that the unscattered light becomes less intense as the sun gets closer and closer to the horizon (even so you shouldn't look directly at the sun).

It isn't necessary to risk looking directly at the sun to observe how its color changes as it sets.  Instead you can just look at the sunlight that is reflected by clouds near the horizon.

(source of the image above)